The Three Magical Books of Solomon: The Greater and Lesser Keys & the Testament of Solomon (Paperback) 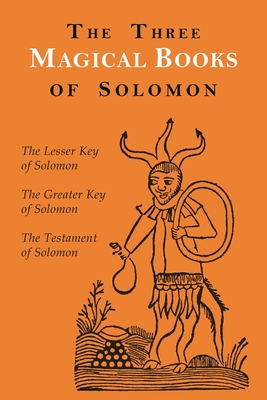 Reprint of Three Grimoires in One Volume. This omnibus edition reprints the three great magical works of King Solomon in one volume. The Key of Solomon the King was originally researched and translated by S.L. MacGregor Mathers from ancient manuscripts in the British museums. The work is traditionally divided into two books detailing the Key of King Solomon. The Lesser Key of Solomon 1904], or the Clavicula Salomonis Regis, or Lemegeton, is a compilation of materials and writings from ancient sources making up a text book of magic or "grimoire." Portions of this book can be traced back to the mid-16th to 17th centuries, when occult researchers such as Cornelius Agrippa and Johannes Trithemisus assembled what they discovered during their investigations into ancient texts. The Greater Key 1914] lists and describes a variety of purifications an exorcist should undergo. Instructions are given on clothing, magical devices, and even animal sacrifices. The Testament of Solomon 1898] is attributed to King Solomon of the Old Testament. Written in the first-person narrative, the book tells the story of the creation of the magical ring of King Solomon and how Solomon's ring was used to bind and control demons, including Beelzebub.

The manuscripts from which this work was discovered date from the 15th, 16th, and 17th centuries. All were written in Greek. This dating makes most experts believe that the work is medieval. But some scholars argue that it is likely that the work comes from the 5th or 6th centuries. Regardless of the dates, these texts provide an immensely interesting description of how King Solomon tamed various demons to build his temple. The text includes predictions of the coming of Christ, as one demon explains to Solomon that while he may be bound, the only thing that can truly take his power away is the man born from a virgin who will be crucified by the Jews.