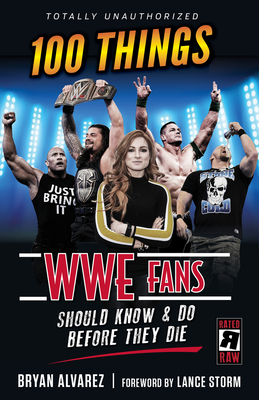 Most WWE fans tune in each year to watch WrestleMania, remember the Monday Night Wars of the 1990s, and have heard the story behind the Montreal Screwjob. But only real fans recall the name of Steve Austin's original character, can tell you how the Intercontinental championship was created, or know the best places to get an autograph of their favorite superstars.
100 Things WWE Fans Should Know & Do Before They Die is the ultimate resource guide for true members of the WWE Universe. Whether you've been keeping kayfabe since the days of Bruno Sammartino or you're a more recent supporter of AJ Styles and Becky Lynch, these are the 100 things all fans need to know and do in their lifetime. Bestselling author Bryan Alvarez has collected every essential piece of WWE knowledge and trivia, as well as must-do activities, and ranks them all from 1 to 100, providing an entertaining and easy-to-follow checklist that will have you chanting "YES! YES! YES!"

A former professional wrestler, Bryan Alvarez has been editor and publisher of the Figure Four Weekly newsletter since 1995, now part of Wrestling Observer. He hosts numerous radio shows, such as Wrestling Observer Live and Figure Four Daily, and is the coauthor of the best-selling classic The Death of WCW.