Death of a Red Heroine (An Inspector Chen Investigation #1) (Paperback) 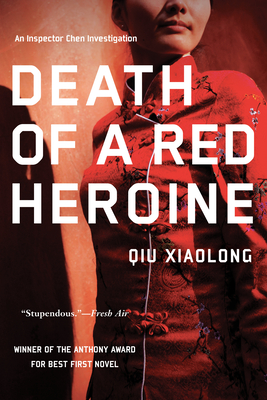 By Qiu Xiaolong
Email or call for price
Backordered

A young “national model worker,” renowned for her adherence to the principles of the Communist Party, turns up dead in a Shanghai canal. As Inspector Chen Cao of the Shanghai Special Cases Bureau struggles to trace the hidden threads of her past, he finds himself challenging the very political forces that have guided his life since birth. Chen must tiptoe around his superiors if he wants to get to the bottom of this crime, and risk his career—perhaps even his life—to see justice done.

Qiu Xiaolong has been published in more than twenty languages, and more than one million copies of his mysteries, poetry, and literary criticism are in print around the world. He is the author of eight other Inspector Chen Cao mysteries, including A Loyal Character Dancer and When Red Is Black. He lives in St. Louis with his wife and daughter.

Praise for Death of a Red Heroine

“Xiaolong knows that words can save your soul and in his pungent, poignant mystery, he proves it on every page.”
—Chicago Tribune

“Death Of A Red Heroine grabbed my imagination, took me on a slowly, intricately built journey that nevertheless felt sexy and slick, and kept me turning the pages deep into the night . . . A refreshingly brave exploration into political China, woven around a tense thriller and likeable, enigmatic characters.”
—Huffington Post

“A fascinating and thought-provoking read, rich in descriptions of delicious meals, beautiful gardens and impossibly cramped housing conditions. Not to be missed.”
—The Guardian

“A tale of murder, deception and politics that has the ring of authenticity.”
—St. Louis Post-Dispatch

“An absolutely exquisite book (and I don’t believe I’ve ever before used this descriptor in a review!) . . . Qiu Xiaolong’s attention to culture, politics, loyalty (to persons and to country), poetry, justice (whatever this may be), love, art more generally, law and order and the sacred and intimate relationship between the Chinese people and their food, all blend to form an intellectually stimulating, beautiful, and surprising work of art.”
—Deadly Pleasures Magazine

“Xiaolong, a Chinese poet and literary critic, is adept at threading social commentary of China in the 1990s with his detective's movements through social strata in search of the killer . . . Xiaolong's first mystery may be the most impressive debut of the year.”
—Booklist

“This political mystery offers a peek into the tightly sealed, often crooked world of post-Tiananmen Square China . . . An impressive and welcome respite from the typical crime novel.”
—Publishers Weekly

“In Death of a Red Heroine China is not only the setting . . . The Party’s attempts to recoup political legitimacy from the real setting for this mystery and cast a dark shadow over every step in its resolution. Raw, naked power is at the core of both the murder and its investigation, but its manifestations are anything but predictable in this splendid first work.”
—Robert E. Hegel, Professor of Chinese and Comparative Literature, Washington University

“A brilliant debut . . . I cannot imagine any readers, including fellow whodunit addicts, who would want to miss this fine novel, which makes a strong bid for a place in lasting literature.”
—Mona Van Duyn, U.S. Poet Laureate, 1992–3

“A sheer delight.”
—I Love a Mystery

“Unique in that it combines the stringency and rigour of police work, the inflexibility of Communism and the need for artistic expression . . . The novel is a fascinating read.”
—Mystery Review

“The main character is three-dimensional and practically jumps off the pages. I am anticipating another case with Inspector Chen.”
—The Snooper

“Much more than a detective story, it is an elegant, true-to-life portrait of China today.”
—Persimmon