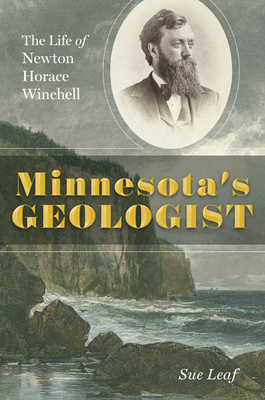 Winner of the 2021 Minnesota Book Award for Minnesota Nonfiction

The story of the scientist who first mapped Minnesota’s geology, set against the backdrop of early scientific inquiry in the state

At twenty, Newton Horace Winchell declared, “I know nothing about rocks.” At twenty-five, he decided to make them his life’s work. As a young geologist tasked with heading the Minnesota Geological and Natural History Survey, Winchell (1839–1914) charted the prehistory of the region, its era of inland seas, its volcanic activity, and its several ice ages—laying the foundation for the monumental five-volume Geology of Minnesota. Tracing Winchell’s remarkable path from impoverished fifteen-year-old schoolteacher to a leading light of an emerging scientific field, Minnesota’s Geologist also recreates the heady early days of scientific inquiry in Minnesota, a time when one man’s determination and passion for learning could unlock the secrets of the state’s distant past and present landscape.

Traveling by horse and cart, by sailboat and birchbark canoe, Winchell and his group surveyed rock outcrops, river valleys, basalt formations on Lake Superior, and the vast Red River Valley. He studied petrology at the Sorbonne in Paris, bringing cutting-edge knowledge to bear on the volcanic rocks of the Arrowhead region. As a founder of the American Geological Society and founding editor of American Geologist, the first journal for professional geologists, Winchell was the driving force behind scientific endeavor in early state history, serving as mentor to many young scientists and presiding over a household—the Winchell House, located on the University of Minnesota’s present-day mall—that was a nexus of intellectual ferment. His life story, told here for the first time, draws an intimate picture of this influential scientist, set against a backdrop of Minnesota’s geological complexity and splendor.

Sue Leaf is author of The Bullhead Queen: A Year on Pioneer Lake; A Love Affair with Birds: The Life of Thomas Sadler Roberts; and Portage: A Family, a Canoe, and the Search for the Good Life, all published by Minnesota. She also wrote Potato City: Nature, History, and Community in the Age of Sprawl. Trained as a zoologist, she writes on environmental topics and is editor of the newsletter of the Wild River Audubon Society of east-central Minnesota.

"Sue Leaf has done a great service for the people of Minnesota and beyond by telling the story of Newton Horace Winchell so thoughtfully and beautifully. Readers of Minnesota's Geologist will be rewarded with new insights into why the world around us functions as it does. This is a book that I've been hoping for."—Harvey Thorleifson, director, Minnesota Geological Survey

"Minnesota’s Geologist is an engaging biography of a pioneering scientist and a vivid tour through Minnesota’s landscape. Sue Leaf weaves the geology and natural history of the state seamlessly through the narrative of Winchell’s life and boundless curiosity. The reader travels with Leaf, following Winchell’s steps through Minnesota and beyond."—Julie Bartley, Gustavus Adolphus College

"A fascinating and delightful story of Newton Horace Winchell's personal and professional life, from a sixteen-year-old schoolteacher to the director of the Minnesota Geological Survey. Follow him throughout the state as he studies the varied geology of Minnesota. Sue Leaf conducted thorough research, and this book will be appreciated by everyone, not only geologists!"—Richard W. Ojakangas, professor emeritus, University of Minnesota Duluth

"Imagine being hired to map Minnesota’s geology, by canoe, horse, or train—in just twenty years! Newton Horace Winchell embarked on this mission when both he and the field of geology were young, and Sue Leaf lets you tag along. She blows dust off of his annual reports, adds detail with letters and newspapers, and deftly places Winchell in American Progressive Era history and Minnesota in earth history."—Carrie Jennings, research and policy director, Freshwater Society

"In Minnesota’s Geologist, Leaf expertly manages the volume of geology — neither technically overwhelming nor patronizing for the lay reader. She writes with grace, reverence and awe about the task Winchell faced: His work, she wrote, would tell the story 'of the immense forces of nature, of rocks and fire and ice and time — unimaginable expanses of time — that few in the young state had pondered.'"—Star Tribune

"This well researched work explores [Newton Horace Winchell] life history and his many contributions to our knowledge of the state’s geologic attributes and our understanding of its native people."—Northern Wilds

"Winchell at age 25 dedicated himself to geological scientific inquiry. His passionate and adventurous life story, told for the first time by environmental historian Sue Leaf, guides readers through the geologic history of the state."—Minnesota History