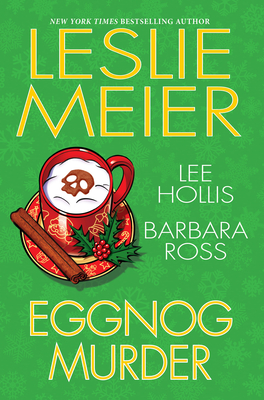 By Leslie Meier, Lee Hollis, Barbara Ross
$12.95
Not Yet Published

Few things in life are as picture perfect as Christmas in Maine—until murder dampens the holiday spirit. It must be something in the eggnog . . .

EGGNOG MURDER by LESLIE MEIER
When a gift-wrapped bottle of eggnog—allegedly from the Real Beard Santa Club—proves to be a killer concoction for a Tinker’s Cove local, all Lucy Stone wants for Christmas is to find the murdering mixologist who’s stirring up trouble.

DEATH BY EGGNOG by LEE HOLLIS
Food and cocktails columnist Hayley Powell has never cared much for Bar Harbor’s grouchy town librarian, Agatha Farnsworth. But after the Scroogy senior has a fatal—and suspicious—allergic reaction to supposedly non-dairy eggnog, it’s up to Hayley to ladle out some justice.

NOGGED OFF by BARBARA ROSS
Julia Snowden’s tenant Imogen Geinkes seems to be jinxed. First, her poorly named “Killer Eggnog” gives all her co-workers food poisoning at the holiday party, then her boyfriend’s body shows up in Julia’s moving truck as she’s headed back to Busman’s Harbor. Now Julia has to get moving to catch the cold-hearted culprit.

LESLIE MEIER is the New York Times bestselling author of over twenty-five Lucy Stone mysteries and has also written for Ellery Queen’s Mystery Magazine. She is currently at work on the next Lucy Stone mystery. Readers can visit her website at www.LeslieMeier.com.

LEE HOLLIS is the pen name for a brother and sister writing team. Rick Copp is a veteran film and television writer/producer and also the author of two other mystery novel series. He lives in Palm Springs, California. Holly Simason is an award-winning food and cocktails columnist living in North Carolina. You may visit their website at www.LeeHollisMysteries.com or find them on Facebook by typing in: Lee Hollis.

Barbara Ross is the author of the Maine Clambake Mystery novels. Books in the series have been nominated for multiple Agatha Awards for Best Contemporary Novel and have won the Maine Literary Award for Crime Fiction. Barbara’s novellas featuring the Maine Clambake characters are included along with stories by Leslie Meier and Lee Hollis in the holiday anthologies Eggnog Murder, Yule Log Murder, and Haunted House Murder. Her second series, the Jane Darrowfield Mysteries, began with Jane Darrowfield, Professional Busybody. Barbara and her husband live in Portland, Maine. Readers can visit her website at www.maineclambakemysteries.com.