The Spirit and the Sky: Lakota Visions of the Cosmos (Studies in the Anthropology of North American Indians) (Hardcover) 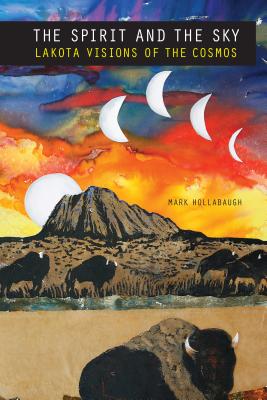 The interest of nineteenth-century Lakotas in the Sun, the Moon, and the stars was an essential part of their never-ending quest to understand their world. The Spirit and the Sky presents a survey of the ethnoastronomy of the nineteenth-century Lakotas and relates Lakota astronomy to their cultural practices and beliefs. The center of Lakota belief is the incomprehensible, extraordinary, and sacred nature of the world in which they live. The earth beneath and the stars above constitute their holistic world.

Mark Hollabaugh offers a detailed analysis of aspects of Lakota culture that have a bearing on Lakota astronomy, including telling time, their names for the stars and constellations as they appeared from the Great Plains, and the phenomena of meteor showers, eclipses, and the aurora borealis. Hollabaugh’s explanation of the cause of the aurora that occurred at the death of Black Elk in 1950 is a new contribution to ethnoastronomy.

Mark Hollabaugh is an emeritus instructor of physics and astronomy at Normandale Community College in Bloomington, Minnesota.

"Both beginning and experienced students in Lakota studies will [find] The Spirit and the Sky worthwhile reading. . . . It will be of special importance for those wishing to pursue further research in Lakota ethnoastronomy."—Harvey Markowitz, North Dakota History
— Harvey Markowitz

"The Spirit and the Sky contributes another perspective on how the stars and universe have shaped the history of the Lakota people."—Richard Williams, Tribal College Journal
— Richard Williams

"This reviewer strongly recommends The Spirit and the Sky to readers interested in the Lakota or in ethnoastronomy, or both, for it provides an avenue into important spiritual aspects of Lakota life, their understanding of and relationship to the sky and its contents, and the field of ethnoastronomy."—Guy Gibbon, Nebraska History
— Guy Gibbon

“Through a comprehensive introduction to Lakota cultural astronomy, Mark Hollabaugh invites the reader to see the limitless skies over the Northern Plains much as did the Lakota of the nineteenth century. His incisive assessment of winter counts, ledger books, written records, celestial phenomena, and the Sun Dance is remarkably illuminating and heartily welcome.”—Harry Thompson, executive director of the Center for Western Studies at Augustana University

“Mark Hollabaugh treats us to a tutorial on basic observational astronomy while skillfully and thoroughly leading us into an understanding of the natural cycles of earth and sky, especially the recurring nature of celestial phenomena, as perceived through traditions of the great Lakota Nation of the North American Plains.”—Von Del Chamberlain, author of When Stars Came Down to Earth: Cosmology of the Skidi Pawnee Indians of North America
— Von Del Chamberlain