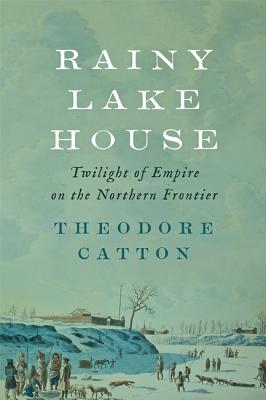 By Theodore Catton
$44.48
Email or call for availability

A fateful encounter between three backwoodsmen on the British-American-Indian frontier leads to the pursuit of wealth--and tragedy.

In September 1823, three men met at Rainy Lake House, a Hudson's Bay Company trading post near the Boundary Waters. Dr. John McLoughlin, the proprietor of Rainy Lake House, was in charge of the borderlands west of Lake Superior, where he was tasked with opposing the petty traders who operated out of US territory. Major Stephen H. Long, an officer in the US Army Topographical Engineers, was on an expedition to explore the wooded borderlands west of Lake Superior and the northern prairies from the upper Mississippi to the forty-ninth parallel. John Tanner, a "white Indian" living among the Ojibwa nation, arrived in search of his missing daughters, who, Tanner believed, were at risk of being raped by the white traders holding them captive at a nearby fort.

Rainy Lake House weaves together the captivating stories of these men who cast their fortunes in different ways with the western fur trade. Drawing on their combined experiences, Theodore Catton creates a vivid depiction of the beautiful and dangerous northern frontier from a collision of vantage points: American, British, and Indian; imperial, capital, and labor; explorer, trader, and hunter. At the center of this history is the deeply personal story of John Tanner's search for kinship: first among his adopted Ojibwa nation; then in the search for his white family of origin; and finally in his quest for custody of his half-Indian children.

Rainy Lake House is a character-driven narrative about ambition, adventure, alienation, and revenge. Catton deftly crafts one grand narrative out of three and reveals the perilous lives of the white adventurers and their Indian families, who lived on the fringe of empire.

Theodore Catton is an associate research professor of history at the University of Montana. He is the author of Inhabited Wilderness: Indians, Eskimos, and Alaska's National Parks and American Indians and National Forests.