The Hermetic Tradition: Symbols and Teachings of the Royal Art (Paperback) 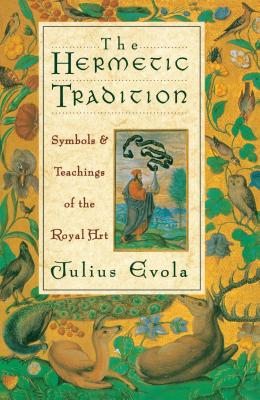 This important survey of alchemical symbols and doctrines sets forth the mysterious worldview and teachings of the practitioners of the "royal art." One of the leading exponents of the Hermetic tradition, Julius Evola demonstrates the singularity of subject matter that lies behind the words of all adepts in all ages, showing how alchemy--often misunderstood as primitive chemistry or a mere template for the Jungian process of "individuation"--is nothing less than a universal secret science of human and natural transformation.
First published in 1931 in Italian. This is the first English translation.

Draws from a host of sources in the Western esoteric tradition--works on theurgy, magic, and gnosticism from neoplatonic, Arab, and medieval sources.

A controversial philosopher and critic of modern Western civilization, Julius Evola (1898-1974) wrote widely on Eastern religions, alchemy, sexuality, politics, and mythology. Inner Traditions has published his Eros and the Mysteries of Love: The Metaphysics of Sex, The Yoga of Power, The Hermetic Tradition, Revolt Against the Modern World, The Mystery of the Grail and Ride The Tiger.

"This book has been hailed as one of the clearest works on alchemy ever written."
— New Dawn, May-June 2003

"The Hermetic Tradition is not a book to be read once for the value of its information about European alchemy--which admittedly is great--but to be revisited as one's own alchemical work, in whatever form, proceeds. Each reading will bring new levels of insight."
— Gnosis Magazine

"Evola is a major force in the area of modern European esotericism, but is little known in the English speaking world. Author of numerous works on esoteric practices and philosophy, Evola is a name that all serious students of esotericism should be familiar with. Evola discloses in clear and meaningful terms the ideas present and their use in practice. Evola is not for the feint of heart or brain however. He deals with difficult subjects and presents them in an intelligent and experienced manner. Anyone seeking a literary initiation into the world of deep thought and practices can do no better than to start with Evola."
— Institute for Hermetic Studies, Feb 2006

"This book is a good place to use as a center for your alchemical studies."
— John Gilbert, The Tarot Institute, February 2004

"Evola writes serious books about serious subjects, yet manages to present the material in a manner that is both meaningful and practical. . . . occultists who want to understand a man who was a major force in Italian esotericism . . . will find a wealth of knowledge and esoteric insight."
— Institute for Hermetic Studies, Mar 2006

"Considered one of the clearest and strongest works on the art of Alchemy ever written."
— Robert James Buratti, New Dawn, July/August 2002