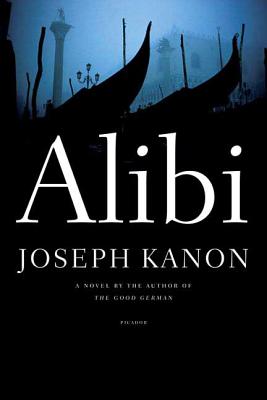 From the bestselling author of Los Alamos and The Good German comes a riveting tale of love, revenge and murder set in postwar Venice.

Winner of the Hammett Prize

It is 1946, and Adam Miller has come to Venice to visit his widowed mother and try to forget the horrors he has witnessed as a U.S. Army war crimes investigator in Germany. But when he falls in love with Claudia, a Jewish woman scarred by her devastating experiences during World War II, he is forced to confront another Venice, a city still at war with itself, haunted by atrocities it would rather forget. Everyone, including his mother's suave new Venetian suitor, has been compromised by the occupation, and Adam finds himself at the center of a web of deception, intrigue, and unexpected moral dilemmas.

When is murder acceptable? What are the limits of guilt? How much is someone willing to pay for a perfect alibi?

JOSEPH KANON is the author of the novels Alibi, The Good German, Los Alamos and The Prodigal Spy. Before becoming a full-time writer, he was a book publishing executive. He lives in New York City.

“Burrowing deeply into Patricia Highsmith territory, Kanon has crafted an absorbing tale. . . . [Kanon] is frequently compared to the likes of John le Carré and Graham Greene. With Alibi, he shows that he's up to the comparison.” —San Francisco Chronicle

“Kanon's richest, most full-blooded work to date . . . [He] has mastered the art of the historical thriller.” —The New York Times Book Review

“Disturbing and hypnotically readable, Alibi is a mystery, a love story, and a work of philosophy--and a perfect companion for the thriller reader who wants a philosophical challenge, as well as entertainment.” —Richmond Times-Dispatch

“Joseph Kanon is a specialist in superior historical thrillers. . . . Moody, deeply atmospheric, and as labyrinthine as the streets of Venice.” —The Seattle Times

“Alibi is a thriller with a slide-rule perfect plot. . . . Wholly engrossing and one of the finest thrillers you will read this year--up there with the classics of the genre.” —The Daily Telegraph (London)

“If you want to explore life, love, death, beauty, and moral confusion--all glimpsed from a gondola, so to speak--you won't do much better than this.” —The Washington Post

“Once again Kanon has written a novel set against the backdrop of World War II that is evocative and sensitive, moody and thought-provoking.” —Arizona Daily Star

“Kanon keeps us turning pages. . . . His best book yet.” —The Winston-Salem Journal

“Kanon juxtaposes a powerful love story and a gripping thriller against a palpable historical moment. . . . The novel holds us completely, with its vision of a sadly inadequate hero striking deep at our worst fears about ourselves.” —Booklist

“You will admire this book for its descriptions of the theatrically beautiful Venetian cityscape and for its engrossing rendition of the city's postwar hangover-party mood--plus the inclusion of a cracking good murder mystery.” —The News & Observer

“Kanon offers such vivid sensory detail that a reader emerges as steeped in atmospherics as a seasoned diplomat with a passport full of visa stamps. You feel initiated, as if you've been let in on some dark and well-kept secrets from some of the twentieth century's most pivotal moments. . . . In Kanon's eclectic cast of policemen, soldiers, revolutionaries, and ex-pat socialites, no one is spared the deep, dark smudges offered by war and its aftermath.” —Baltimore Sun

“If you want to explore life, love, death, beauty, and moral confusion, you won't do much better than this.” —San Jose Mercury News