Waters of the World: The Story of the Scientists Who Unraveled the Mysteries of Our Oceans, Atmosphere, and Ice Sheets and Made the Planet Whole (Hardcover) 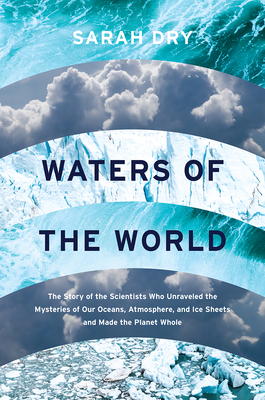 From the glaciers of the Alps to the towering cumulonimbus clouds of the Caribbean and the unexpectedly chaotic flows of the North Atlantic, Waters of the World is a tour through 150 years of the history of a significant but underappreciated idea: that the Earth has a global climate system made up of interconnected parts, constantly changing on all scales of both time and space. A prerequisite for the discovery of global warming and climate change, this idea was forged by scientists studying water in its myriad forms. This is their story.

Linking the history of the planet with the lives of those who studied it, Sarah Dry follows the remarkable scientists who summited volcanic peaks to peer through an atmosphere’s worth of water vapor, cored mile-thick ice sheets to uncover the Earth’s ancient climate history, and flew inside storm clouds to understand how small changes in energy can produce both massive storms and the general circulation of the Earth’s atmosphere. Each toiled on his or her own corner of the planetary puzzle. Gradually, their cumulative discoveries coalesced into a unified working theory of our planet’s climate.

We now call this field climate science, and in recent years it has provoked great passions, anxieties, and warnings. But no less than the object of its study, the science of water and climate is—and always has been—evolving. By revealing the complexity of this history, Waters of the World delivers a better understanding of our planet’s climate at a time when we need it the most.

Sarah Dry is a writer and historian of science. She is the author The Newton Papers: The Strange and True Odyssey of Isaac Newton's Manuscripts. Born and raised in Philadelphia, she now lives in Oxford, UK, with her family, and is on the board of the Science Museum Group.

“Dry takes readers on a journey through the history of climate science in this smart, compelling, and timely title. By focusing on specific scientists, Dry gifts readers with entertaining portraits of some thoroughly interesting if largely unknown individuals. . . . She shows how an artful blending of the personal and professional can result in unusually affecting scientific profiles. A true success on every literary level.”
— Booklist, Starred Review

"Inspired. . . . It is history, Dry shows, that helps to ground our understanding of the nature and findings of baggy multidisciplinary fields like climate science. So at a time when millions of people worldwide are demonstrating over the climate crisis—basically fighting for a future—Dry looks to the past: to the very roots of the science of planetary change, told through the stories of six dedicated researchers. . . . She has wonderfully conveyed how scientific diversity worked to reveal scientific unities—how the insights of generations of astrophysicists, geologists, oceanographers, glaciologists, and meteorologists converged and pieced Earth systems together. That collaboration through time and space has fostered resilience in practice and robustness in discovery. In denialism-drenched times, that is a vital insight."
— Nature

"Compelling evidence for the need to change our approach to the waters that made us. . . . Dry’s Waters of the World offers the big science of water. Her interest goes above and beneath the oceans to understand how the study of glaciers, vapor, clouds, and rain over the past one hundred fifty years created the discipline of climate science and with it the ongoing attempt to understand not just how our planet works, but how humanity began and continues to affect it. . . . Laudable. . . . The water that surrounds us will continue to sustain us: but for how long?"
— Financial Times

"Characterized by strong storytelling within a scholarly framework, this book will appeal to readers interested in how science is performed and accomplished, and anyone curious about Earth’s changing climate."
— Library Journal

"In a very limited nutshell, the story of how we, today, have meteorological forecasts that are getting nearer and nearer to being correct is down to astronomers, simple old time sailor logic, men dabbling in weather research, the British Raj, and the attempt to predict the Monsoon after several years of famine. It all makes a fantastic compilation."
— NB

“An account of the two-hundred-year effort to understand the world’s climate system, Waters of the World is not only timely but also one of the most beautifully written books on science that I have seen in a long time. It is one thing to communicate this complex and important topic lucidly, but quite another to make the material seductive, poetic, enthralling. I was left wanting to read John Tyndall’s writings on ice, to hear the epic creak of Alpine glaciers, to go cloud-spotting off Tenerife and float turnips in Scottish lochs. Describing one of the most vital but least visible histories in modern science, and rescuing from neglect a host of pioneers who helped us to see how our planet works, it is a remarkable achievement.”
— Philip Ball, author of "H2O: A Biography of Water" and "The Water Kingdom: A Secret History of China"

“Waters of the World sparkles with lyricism and wit. Dry is a gifted storyteller, and her research into the pre-history of Earth system science has turned up gripping tales of risk, adventure, defiance, and discovery. A unique and important book.”
— Deborah R. Coen, Yale University, author of "Climate in Motion: Science, Empire, and the Problem of Scale"

“In this cleverly argued and brilliantly written history, Dry traces the interaction between the dramatic careers of six major figures in the history of climatology and the uneven and surprising emergence of a science of climate since the mid-nineteenth century. The book illuminates its history with tales of mountain climbing and dramatic voyages, of tell-tale ice cores and threatening hurricanes. No set of stories could be more urgent now and in need of the care and intelligence with which they are told here. In showing how the focus of these engaging and energetic scientists and their many colleagues gradually shifted from a collective search for the principles of a global climate system to visions of dynamic, interactive, and unstable climates in change, this book has much to teach about the roots of the most reliable knowledge of climate and how it should be best understood in its full historical and cultural setting.”
— Simon Schaffer, University of Cambridge, coauthor of "Leviathan and the Air-Pump: Hobbes, Boyle, and the Experimental Life"

“Part history, part biography, part scientific tutorial, part philosophy, Dry humanizes and personalizes the science of climate change as it has evolved over time. By focusing on a wide selection of important contributors dating back to the eighteenth and nineteenth centuries (Tyndall, Smyth, Riehl, Malkus Simpson, Stommel, Dansgaard, and numerous others) the human story emerges from the science. She describes the fits and starts, the emotional elements, conceptual and observational difficulties, and the sheer fun these scientists had along the way as the understanding of climate emerged as a serious intellectual endeavor.”
— Carl Wunsch, Cecil and Ida Green Professor of Physical Oceanography, Emeritus, Massachusetts Institute of Technology

“In compelling portraits of six scientists and their work, Dry probes the origins of what we now call climate science. She brings alive scientific mysteries about glaciers, clouds, oceans and the atmosphere to show how our present understanding of climate as a complex global system developed over the last 170 years. It’s a brilliant historical jigsaw puzzle, revealing how big questions about our planet have evolved and interlocked. But more than this, she makes a powerful argument about what it means to study the earth. Our knowledge of our planet, and our place on it, grew from concerns and assumptions that are as dynamic and full of change as the natural phenomena we study. How are we driven to ask the questions about nature that we do? Dry’s answers take us to the human heart of science. Exploring her subjects with unfailing insight, she brings each individual set of intellectual passions into focus. Stepping gracefully from Victorian England to late twentieth-century Greenland, her biographies illuminate the combination of speculation, observation, calculation, and assumptions that have shaped science at different moments in the past. As she says, global visions come from individuals, particular places and moments in time. Such a profoundly human account of knowledge-building may be our best guide to thinking about the planet’s future.”
— Katharine Anderson, York University, author of "Predicting the Weather: Victorians and the Science of Meteorology"

"Waters of the World offers a far-reaching and wonderfully unique take on the history of climate science. Focusing on key scientists, some less known than others, the book illustrates vividly and through fine details how studies of different forms of water—from a fluid in the Atlantic Ocean to rainfall in the Indian Monsoon, clouds at the root of hurricanes, and glacial ice on mountain tops and polar ice sheets—were all fundamental for our present-day understanding of both water and the global climate. Dry is an expert at tracing the deep scientific questions of the day, showing how specific scientists—fascinating people themselves—spent their lives trying to resolve those intellectual puzzles of the global environment."
— Mark Carey, University of Oregon, author of "In the Shadow of Melting Glaciers: Climate Change and Andean Society"

"In the eight detailed, immensely readable essays of Waters of the World, Dry shows how over the past 150 years scientists have slowly come to see climate as a global system, and to recognize how human activity contributes to changes in the complex interactions of ice, oceans, and the atmosphere. . . . Dry looks beneath her subjects’ masks with sympathy and curiosity. Noting their shared sense of a quest, at once playful and serious, in the end she turns back to the reader: 'They each, in their own way, sought something deeply meaningful from their engagement with the planet. So should we all.'"
— New York Review of Books

"'Out of whose womb came the ice? and the hoary frost of heaven, who hath gendered it?' So asks the author—in the voice of the Hebrew god Yahweh—of the biblical story of Job. Dry doesn’t have an answer as to exactly the 'who' regarding the causes of all these things; however in her new book Waters of the World, she does provide considerable information about those who discovered the 'how' of these various phenomena that play such critical roles in the Earth’s intricate, and essential for life, water cycle."
— Well-read Naturalist

"Waters of the World takes readers from the lab to the study to the field and back again. . . . [It is] an accessible work of science history that draws on some of the best recent scholarship in the field. . . . A history that functions as a plea for interdisciplinary work on the problem of climate. The book ends with a call to climate scientists to embrace their interdisciplinary roots and to recognize and celebrate that there are 'multiple ways of knowing the planet.'"
— Science

"Dry’s assured and fluid prose unravels the complicated concepts across the disciplines that comprise climate science. The interconnected forces that move heat from tropics to poles and that drive ocean and air currents are analyzed in a masterful, entertaining way. It becomes clear that Earth operates as a complex and turbulent machine. Waters of the World chronicles how much we have learned, how much we don’t know, and how much we need to learn if we are to halt the pace of global warming."
— Foreword Reviews

"It reminds us how little we once knew and how, not long ago, scientists made mistakes as big, crazy, and glorious as their discoveries. It also reminds us how young the idea of connectedness is; we are in the infancy of understanding how everything from ice sheets to ocean gyres are interwoven. Perhaps here is where Dry is onto something. Maybe our grasp of that connectedness will be the key to facing climate change, humanity’s biggest challenge."
— Washington Independent Review of Books