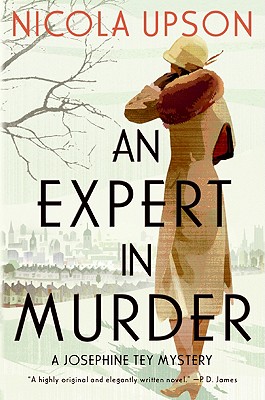 March 1934. Revered mystery writer Josephine Tey is traveling from Scotland to London for the final week of her play Richard of Bordeaux, the surprise hit of the season, with pacifist themes that resonate in a world still haunted by war. But joy turns to horror when her arrival coincides with the murder of a young woman she had befriended on the train ride—and Tey is plunged into a mystery as puzzling as any in her own works.

Detective Inspector Archie Penrose is convinced that the killing is connected to the play, and that Tey herself is in danger of becoming a victim of her own success. In the aftermath of a second murder, the writer and the policeman must join together to stop a ruthless killer who will apparently stop at nothing.

Nicola Upson is the author of five previous Josephine Tey mysteries, including An Expert in Murder, and two works of nonfiction. She has worked in theater and as a freelance journalist. A recipient of an Escalator Award from the Arts Council England, she splits her time between Cambridge  and  Cornwall.

“Nicola Upson has . . . given us a highly original and elegantly written novel.”
— P.D. James

“[A] blithely spirited debut. . . . Upson clearly knows her way around pre-World War II London and the grimy backstages of Covent Garden, and delivers an ending shot through with palpable surprise and emotion.”
— Los Angeles Times

“Upson’s debut is a most promising valentine.”
— Kirkus Reviews